Fixed orifice expansion valves are simple devices that cannot change the amount of refrigerant injected into the evaporator to meet changes in the evaporator heat load. This is not to say that the amount of refrigerant they inject never changes, it is the amount injected does not change purposefully to match a new heat load. The most common type of fixed orifice devices are piston and capillary tubes. Pistons are essentially a hole in a piece of metal held in a distributor that is attached to the inlet of an evaporator. Image 1 shows a piston (B) and the distributor to the right of it. The size of the hole and the pressure difference across it determines the amount of flow through it.

You will notice that I added the qualifier “at a standard set of conditions” in the first paragraph when describing how metering devices are sized. This is especially true for piston type devices as the flow through one is determined by the pressure difference across it which is the difference between the evaporator and condensing pressures. If you are going to size/select one for a system, you need to use a set of conditions that the system will operate in and it should be a set of values that everyone agrees upon and therefore is standardized across that application. These values are the evaporator and condensing pressure and include values for superheat and subcooling. An example of a standardized air conditioning set of values would be ARI A/C CT 130F which specifies a 45F evaporator temperature, 130F condensing temperature, 20F useful superheat and 15F subcooling. Using standardized conditions allows the industry to match up components based on capacity so that they will work with each other in the system.

If the difference between the condensing and evaporator pressures determine flow through a piston orifice, then when these values change, so will the flow. Therefore, you will see lower values of evaporator superheat (And subcooling for that matter.) when the outside temperature is high. If you look at a charging chart for a piston equipped air conditioning system, you will notice that for a given value of indoor Wb temperature, the superheat target value will increase when the outdoor temperature decreases and vice versa. On a hot day with low humidity, evaporator superheat can be in the single digits. A dirty condenser or poor airflow on the same day can result in a flooded compressor. Conversely, on a cooler day with rain falling, superheat is high enough to result in poor dehumidification

Capillary tubes are long narrow diameter tubing and have some capacity for adapting to changes in condenser pressure. This is due to the amount of subcooling decreasing as condensing pressure increases in systems that have a critical charge. When subcooling is reduced, the pressure drop that occurs in the cap tube will result in the liquid flashing to a vapor sooner and since vapor takes up more volume than liquid, this reduces the amount of refrigerant that can flow through the cap tube. However, cap tubes still work best when high and low side pressures are steady. Cap tubes are sized by determining the load at the desired conditions and then picking a cap tube of the recommended diameter and cutting it to the recommended length. If you mess this up, expect either too much or too little flow into the evaporator and an unhappy system.

Listen to Jamie Kitchen and Gary McCreadie discuss superheat as it pertains to adaptive vs. fixed metering devices and subscribe to the HVAC Know It All Podcast.

When you adjust the superheat setting on a TXV, you changing the force applied by the superheat spring. This force ensures there is always a minimum amount of superheat present in the evaporator to protect the compressor against flood back. It is recommended not to adjust the super heat setting until you have eliminated all other potential causes of incorrect superheat or it has been advised by the manufacturer to do so. Adjusting superheat on a TXV when another issue is the problem can turn something that would have been a straightforward repair into something more involved and expensive. 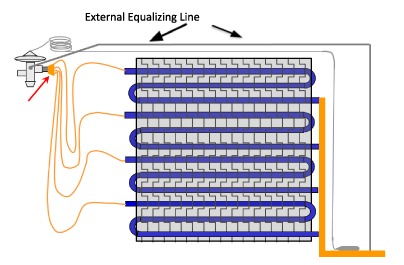 The other major type of adaptive expansion valve is the electronic expansion valve or EEV. They consist of a valve body and motor or solenoid to drive it open and closed. A controller is used that can be programmed for different refrigerants and superheat values to control to. This uses a pressure and temperature signal to determine the evaporator saturation temperature and the amount of superheat present and adjusts the opening and closing of the valve according to the values set in the programming. There is a lot of flexibility in how the valve can control and they can be used across a wide range of applications from very low temperature freezers up to comfort cooling. Often, they are set to maintain a fixed superheat value that is close to optimal at the conditions that the systems will operate under. Other designs will always be trying to reduce the superheat as low as possible while still being stable and offer even more energy saving possibilities (See Image 4) 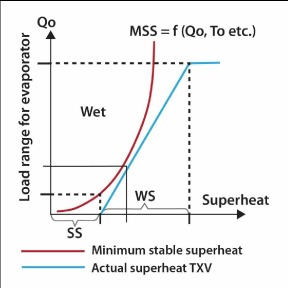 Image 4: Superheat below MSS will result in unstable feeding. Note how TXV superheat is higher than necessary.

EEV’s come in 2 main types, stepper motor valves and pulse width modulated. The stepper motor valve will drive the valve open or closed in small incremental steps using a stepper motor that turns one direction when a positive signal is sent to it and in the opposite direction when a negative signal is applied. (Image 5) How fast the valve opens or closed can be set as well as minimum and maximum opening ranges. Pulse width modulated valve are essentially robust solenoid valves that will either be 100% open or 100% closed. How long the valve remains open over a given amount of time vs. closed determines how much refrigerant is injected into the evaporator. These valves have the advantage of good oil return but must be installed away from other line components to avoid liquid hammer issues. 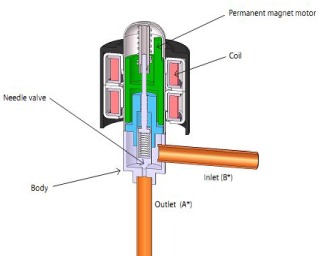 To summarize, fixed metering devices work well when conditions are constant and evaporator loads do not change much. When conditions can very such as condensing pressure or evaporator heat loads, care must be taken to ensure that the valve will meet the requirements but will not over feed the evaporator and slug the compressor. Adaptive metering devices allow for greater flexibility as they will open or close to meet demand regardless of changing conditions if the conditions fall within a specific range. TXV can throttle to half of their rated capacity and then open to provide as much as 30% above their rated capacity when the situation calls for it. EEV’s have an even greater throttling range on the low end and can control loads down to 20% of their rated capacity or even less.