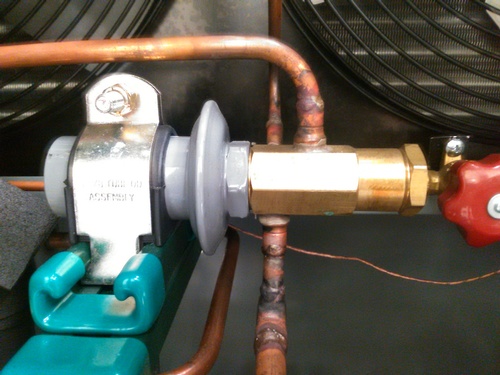 Hot gas bypass valves are a simple and very effective way to add a false load on an evaporator coil.  What is a false load, you ask.  Well, as we have learned in the past, refrigerant pressures are directly related to the ambient temperature surrounding them.

By adding hot gas from the discharge line into the evaporator, we can increase the evaporator pressure and temperature.  Because this load is not put there by heat from the return air, the load is referred to as false.  Hot gas bypass valves can be used in many different applications where the load on the evaporator varies, from residential to server rooms to process cooling equipment.

Using a hot gas bypass valve can also prevent short cycling of a compressor and prevent evaporator freezing in low load conditions.  As a space or process temperature reaches a set point, hot gas can be added to the evaporator to raise its temperature.

With increased evaporator temperature, set point will take longer to achieve, thus increasing compressor run times while preventing evaporator freeze up.  However, it is normal in some applications for evaporators to freeze during normal operation, like in low-temperature refrigeration applications.

A large lecture hall is filled with people, the load will be high, and the system will most likely run at 100% capacity to cool the space. During an intermission, people leave for a break, the load drops, and the room approaches a set point.

The hot gas bypass valve opens, putting a false load on the evaporator. Since the evaporator temperature has been increased, the supply air serving the lecture hall will also be increased, preventing the set point from being reached.

As people re-enter the hall, a true load will increase evaporator temperature, and the hot gas bypass will close.  This prevents compressor short cycling with varying loads; compressor stops and starts are a major factor in compressor failure over time.

Let's take a look at how the valve operates. There are mechanical valves and electrical valves.

The mechanical hot gas bypass valve (HGB) is fed discharge gas (hot gas) teed off from the discharge line.  The output of the valve is directly piped to the inlet of the evaporator after the TX valve.  In some situations, where multiple evaporators are used, it may be piped into the suction line.

There are some disadvantages to this, though, like improper oil return to the compressor.  They are adjusted manually; the Sporlan ADRSE-2, from the video below, is adjusted using an Allen key.

Simulate a low load condition, allowing the pressure to drop below 60 psi.  Starting with the hot gas adjustment backed all the way out, slowly begin to adjust the valve inwards until the flow of hot gas raises the evaporator pressure to the desired setting of 60 psi.  The valve will maintain that set point by monitoring evaporator pressure and adding hot gas as needed.

The electronic hot gas bypass valve (EHGB) uses the same concept as its mechanical counterpart but operates a little differently.  For example, the Sporlan SDR series uses a 12 VDC stepper motor.  A controller must be used in conjunction with the valve and be capable of monitoring temperature and pressure.

The electronic set up can be used for more accurate control of evaporator temperature.  The electronic valve can also be piped to the evaporator inlet or the suction line.  You will need an interface to set up this valve, an Allen key will not suffice.

Generally speaking, there are three ways of piping in a hot gas bypass line.

1.    Evaporator inlet with a distributor; with this method, the hot gas bypass line shall be piped after the TX valve but before the distributor.  An auxiliary side connection (ASC) should be used, the ASC prevents TX valve operating issues as hot gas flows into the evaporator.

2.    Evaporator inlet with no distributor; this configuration follows the same principles as above.

3.    Directly into the suction line, this configuration can be employed when multiple evaporators are used.  It should be noted that oil return to the compressor could be an issue due to refrigerant bypassing the evaporator coil.

Not all valves are created equal; refer to manufacturer specifications and installation and service literature before choosing or setting up a hot gas bypass valve.

Check out the HVAC Know It All App